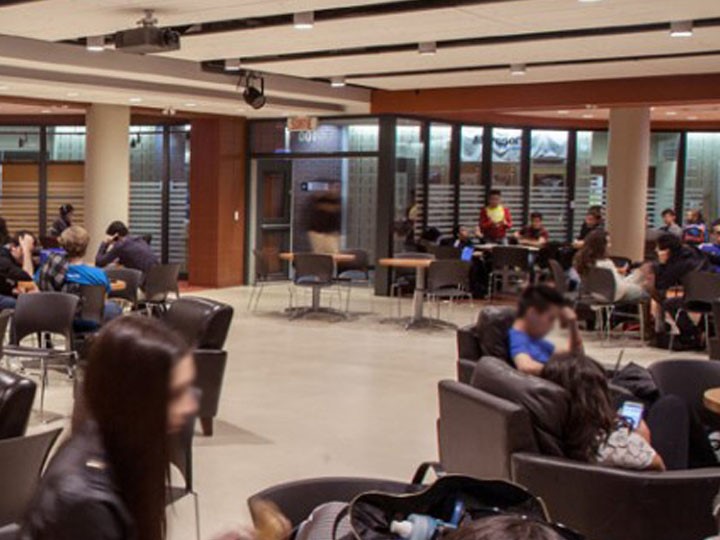 SITUATION
The CSA is an independent, non-profit, private, and legal entity of Quebec and separate from Champlain College. “I began my 38-year career with Champlain College as a recreation technician,” says Ray Corbeil, general manager of CSA. “I programmed student events, advised students, and attended student council meetings. It was and still is important for the students to develop their talents as well as build a social network.” Once the CSA decided to “incorporate,” Corbeil completed the appropriate paperwork and several years later he researched criteria for a new general manager position. It was a surprise when the CSA offered Corbeil the position. “When CSA extended me the general manager position, I was still working full time for the college; however, I was at the end of my career,” notes Corbeil. “We have a “progressive retirement” program that allows people to work but offers more time off. The general manager was a perfect position for shifting into retirement.”

As general manager, one of Cobeil’s responsibilities is to manage access control at the student center. “Back in 2003, the students proposed a keyless access control solution to address lost and mishandled keys,” notes Corbeil. Kaba Solitaire 850 Locks were installed on doors at the student center, and students were provided magnetic stripe card credentials. To gain access into a room, students simply swiped the card through the lock. During the initial installation period, the mag-stripe cards were enrolled at the door, but eventually the student center migrated to a software-managed lock where the programming was done via netbook computer.

“Kaba was initiating a pilot program that would allow us to upgrade sixteen existing Solitaire Locks to work with a new software platform. I had to jump on board to make the upgrade.” — Ray Corbeil

Nearly ten years later, Champlain College renovated some of its buildings including club offices and lounges as well as added a nursing facility. During that project, Solitaire locks were removed from the doors, and in some instances, the locks were cut or ripped off the doors. “Once the dust settled, we quickly realized that the number of functioning locks had been reduced,” says Corbeil. “I contacted Kaba to see if our locks could be repaired. Coincidently, Kaba was initiating a pilot program that would allow us to upgrade sixteen existing Solitaire Locks to work with a new software platform. I had to jump on board to make the upgrade.” Corbeil sent several Solitaire Locks back to the factory in Montreal, Canada for repair and other locks were rebuilt and upgraded on the doors at the student center.

SOLUTION
Kaba Solitaire 850 Locks served the Champlain College student center for almost a decade. While tried and true, an upgrade program allowed the student center to keep their initial lock investment and mag-stripe cards, while expanding access control capabilities and streamlining operations. With the implementation of new Enterprise Software, the student center gained real-time functionality of events, centralized access control management, global lockdown or passage of locks – and all with a few stokes on the keyboard. “With our old system, if I wanted to know who went through a door, I would have to physically go to the door with laptop and get the information out,” recalls Corbeil. “Now I get the information instantaneously via my computer. On the Dashboard, I can see when the doors are open, who is opening them; it gives me a lot more information and in real time.”

The Enterprise Solution is a three-part hardware and software upgrade package that adds Enterprise Software to a central workstation, wireless antennas and circuit boards to existing locks, and Gateway/Routers to communicate from the server to the locks. With Enterprise Software, Corbeil can assign access schedules, manage visitors, create access groups, create reports, and pull an audit trail without leaving his desk. “In the student center, there is a front door with foyer that is left in passage mode from 7:00 a.m. to 7:00 p.m.; students need a card to access the door after hours,” notes Corbeil. “You also need a card to get into any of the club doors, student government offices, storage room, and food bank.” The Enterprise System allows Corbeil to create Door Groups such as Interior Doors, assign specific doors to Door Groups, and then users and access schedules to doors. “Recently I used the vacation/holiday block feature for spring break; and it did exactly what is was programmed to do – let no one in. Needless to say, we are still learning about the system’s capabilities,” says Corbeil.

“If you asked me a year ago, if our locks could have been saved, I would have been hopeful but doubtful,” states Corbeil. “The fact that the locks were repaired, then upgraded, proves that you have a robust and durable product. I am all for stateof-the-art technology, but if you can take a solid foundation, like the Solitaire Locks, then beef it up with innovation, you are managing as a practical leader. We preserved our property and became more efficient in the process – and that’s a good investment.”

ABOUT CHAMPLAIN COLLEGE SAINT-LAMBERT
Established in 1971 as a cégep or Collège d’enseignement général et professional, Champlain College Saint-Lambert offers twoyear general programs, a prerequisite for university studies, and three-year career programs, such as nursing, computer science, graphic communications, and sports marketing. Champlain College is an independent, public corporation that is separate from both high schools and universities.

Champlain College strives to balance academics with students’ personal development and growth. Student Services personnel provide a variety of services and programs that address students’ basic needs and enhance their college experience, including on-campus student clubs and activities. The Champlain Student Association (CSA) funds the different student clubs and groups such as the Charity, Theatre, and Videogame Club as well as organizes many events each year, including Welcome Week, Food Fest, Guest Comedians, and Carnival Week.