Your kind of door hardware

The EMR Series holder/release device incorporates a photoelectric detector and can control the spread of smoke and fire in a specific location or throughout the building if wired into a central alarm panel. 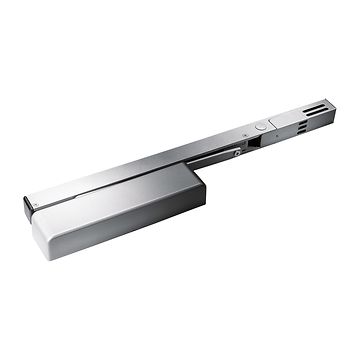 The EMF/EMR Series includes three models for price and door closer feature/function considerations. The TS93 in Contur Design, with the extra efficient cam and roller technology, can be used on larger doors, while the 8900 rack and pinion closer offers a narrow projection for less cost. When value engineering is a concern, the 8600 meets the need.

The EMF/EMR Series’ patented hold open design prevents damage to the door, frame, holder/release device, or other installed hardware. This design enables initial hold while allowing the door to be manually opened beyond the hold open point.

The EMF/EMR Series is compatible with new or existing fire/smoke control systems and can be wired for concealed or surface wiring.

Door shuts in case of an alarm state or power failure

In the case of an alarm state signaled by the central control system or main power failure, current to the electromagnetic hold open device is interrupted, thus allowing the door closing mechanism to take over and shut the door.